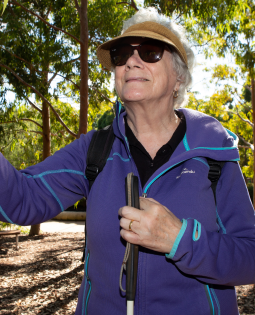 Carol Unger is an advocate for people with vision loss and runs a social group in Dandenong for people who are vision impaired and blind. She enjoys playing Swish (similar to table tennis), meeting people and attending her grand-daughter’s netball games. “Sport and recreation is such a means of connection. It enables people to exercise, to socialise and to educate others,” she said.

“Recently, I was with a group from Blind Sports and Recreation Victoria and we were on an organised walk. A member of the public came over to us and started talking. They learned about vision loss and they learned about our group.” She explained how being in the community is an opportunity for people to gain awareness of the needs of people with vision loss.

Carol became vision impaired in her 30's. “I was married with two children and quite suddenly I lost a lot of sight. I had to adjust to a new way of living, a new way of doing things.”

Carol found that peer support among friends is so important. “I meet people who are vision impaired and quite often they call me to talk informally about challenges. Sport and recreation enables us to access support among people who are living with similar experiences. Being part of the community, and being physically present is so important because we learn from each other.”

Carol participates in the zoom/dial-in exercise program which enables her to participate without having to leave her home. It links her with others and she feels as if she is doing something worthwhile. Carol is looking forward to contributing to Blind Sports and Recreation Victoria as an Ambassador.