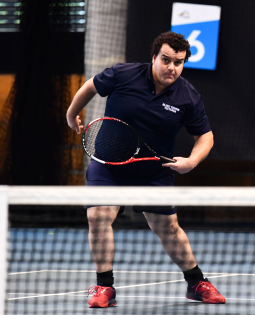 Chris has been involved with Blind Tennis for over 10 years. He says it’s such a privilege to be an Ambassador with Blind Sports and Recreation Victoria.

Chris started playing tennis at a time in his life when ‘everything was going wrong’. ‘Blind Tennis has helped me through the ups and downs of life. The people at Blind Tennis are not like family, they are my family,’ he said. ‘It means everything to me’.

Chris said in playing Blind Tennis, he found a sport that he could do, as most sports are unavailable to him due to his medical situation.”

Chris has competed overseas in Blind Tennis tournaments in Japan, Ireland, and twice in Spain. Before attending the tournaments, he had never travelled on a plane. He never thought he could. Then when he was chosen to compete internationally, it was a dream come true.

Chris really enjoys the social aspect of playing tennis. He also said he loves to see others playing and doing well. He is appreciative of the people at Blind Sports and Recreation Victoria, in particular Maurice, who have helped him ‘beyond words’.