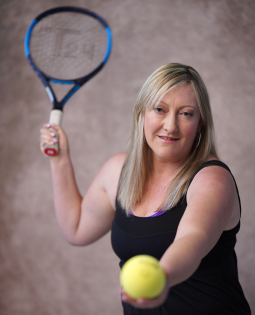 Phoebe Jane is an Ambassador for Blind Sports and Recreation Victoria and has lived with macular degeneration for about 15 years. Macular Degeneration is an eye condition that causes damage to the macular at the back of the eye, leading to central vision loss. In the last five years her condition worsened and she struggled to cope with her vision loss, becoming isolated and feeling alone in her condition. Phoebe said she lived in denial. She realised she no longer wanted to go to certain places, because it was too difficult. “I started to become nervous about not seeing stairs or steps, for example, so I just didn’t go out anymore.”

At the end of 2020, Phoebe joined Blind Sports and Recreation Victoria and she says: 'getting involved with Blind Sports changed my life’. Phoebe heard about BSRV’s Tennis Program on Friday nights at Melbourne Park Tennis Centre. After initially thinking she couldn’t play tennis, Phoebe was encouraged by CEO, Maurice Gleeson to come along and give it a go - and she  went from “I can’t”, to “I can, I will.”

Playing Blind Tennis and being with other people who have experienced vision loss was a game changer for Phoebe. Her self esteem and confidence increased enormously. “I now believe in myself. I want to develop my skills, not just in Blind Tennis, but across all facets of my life. I want to compete.” Phoebe says.

“However, it’s not just about playing tennis, it’s also about the social interaction. For the first time in my life I’ve found other people who have experienced vision loss. We are now starting to meet for coffee. For me, it’s not just sport, it’s friendship.”

Phoebe wants to encourage others who, like her, may be thinking that they can’t do it. At Blind Sports and Recreation Victoria, there’s something for everyone. You may choose to play, watch or get involved by volunteering. Phoebe says she has learned so much from others by being involved - and by becoming an Ambassador, she hopes to help others into the future.