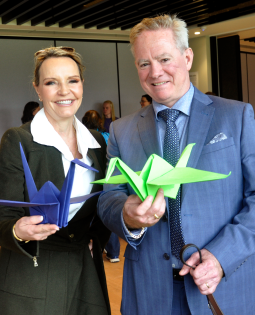 Rob lived a full life as a sighted person living and working in Singapore, Thailand, and the United States. He became vision impaired in his early 40s, diagnosed with Leber’s disease, and was left with 4% of his peripheral vision. Determined to maintain a successful career, he managed a further 21 international business trips over 12 years.

After retiring, Rob wanted to give back to the community, and continue his own personal development. Connecting with Blind Sports and Recreation Victoria (BSRV) was a great opportunity to fulfil both these desires, through playing Blind Tennis and connecting with the blind and vision impaired community.

Playing Blind tennis with BSRV rekindled a love for a sport he enjoyed in his youth. He grew up on a farm in a small town in remote East Gippsland, taught himself to play tennis from a textbook, and played Junior tennis nationally.

Through playing Blind Tennis, Rob has been introduced to, and accompanied many interesting, and motivated people. He has played Blind tennis tournaments regionally, and attended the Blind Tennis exchange in Singapore.

Rob initiated an Origami project with BSRV, building 1000 origami cranes for a worthy charity. He has also participated in BSRV's 'Armchair Travel' sharing his life of adventure. You can find the link below to watch this virtual travel session.

As a BSRV Ambassador, Rob welcomes anyone into the BSRV family, as he was in 2020. He believes that ‘as a community BSRV is a vehicle to accomplish great things - together’.  Rob is passionate about supporting others with vision impairment to achieve their dreams and do things they may believe only sighted people can do. He says ‘being vision impaired is not an impairment to anything’.

Hear about Robert's adventures and escapades by playing BSRV's recorded session of 'Armchair travel with Robert Fletcher'. This is one not to be missed.